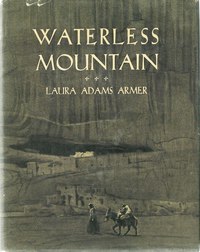 I'm a day late in posting my review of Waterless Mountain. However, this one was laborious enough to get through that I don't really feel bad about my tardiness.

Waterless Mountain is, on its face, a sort of coming-of-age tale about Younger Brother, a Navajo boy who will eventually become a medicine man. The episodes, though, are loosely linked and largely uncompelling -- there's little real conflict, and Younger Brother's through line doesn't serve to create much of a plot. He discovers his destiny very early in the book, and there's never any chance that it won't come true; he's also a flat, uninteresting character, who learns new things but exhibits almost no change or development during the novel. The supporting cast isn't much better. Only Elder Brother's wife hints at any hidden depths, and she appears for only a few pages over the course of the book.

Very nearly the only times that Waterless Mountain comes alive are during the retellings of Navajo legends and the descriptions of the various ceremonies. Indeed, those sections are so much more compelling than any of the rest of the book, that the flimsy plot seems more like an excuse to include this cultural material than anything else. This being a children's book published in the '30s, there aren't any source notes for the stories or rituals, but I did a bit of research on some of them, and the ones I checked seemed to be more or less accurate. Laura Adams Armer spent a great deal of time on the Arizona Navajo Reservation, and she does appear to have done some homework.

This, nevertheless, brings us to another aspect of Waterless Mountain. At the time of its publication, the book was hailed for its sensitivity towards the people it portrays. A representative quote from the book's jacket, from a Dr. A.L. Kroeber who headed the University of California's Anthropology Department, claims that the novel "shows that we have entered a time when the Indian is no longer a dummy to hang our own romanticism on, but an interest and appeal in himself as he really is." Eighty-odd years later, however, what struck me was the uncomfortably paternalistic relationship between the Big Man (the white man who runs the nearby trading post) and the Navajos. Armer, who was ahead of her own time when it came to ideas of equality and race relations, reads as noticeably backward now. It would be churlish to blame her for that, but it does make for an awkward reading experience in the present time.

Famously, Armer had never even heard of the Newbery Award before winning it. She was primarily an artist and photographer -- Waterless Mountain, her first book, was published when she was 57 years old. She would write only six more books, and all of her work except Waterless Mountain and Farthest West (1938) is now out of print (including The Forest Pool, which she wrote and illustrated, for which she won a Caldecott Honor in 1939).

Six Honor Books were named in 1932. None of them are particularly well known now, although Rachel Field's Calico Bush is at least still in print. I will confess that I haven't read that one, and so don't know whether I'd argue that it would have been a better Newbery choice. I will say that I have a hard time categorizing most of the winners from the first decade or two of the Newbery -- even the rather dreadful ones -- as mistakes, given that American children's literature was very much a work in progress.