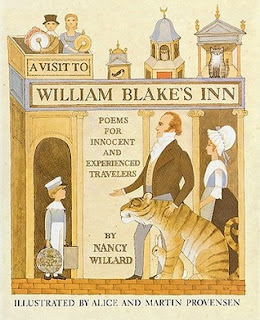 Hello! As observant readers may have noticed, I have been silent in this space for several months. Perhaps I fell through a dimensional portal behind a Burger King, or perhaps a lot of sad things happened in my personal life, but either way, here I am. And I'm skipping ahead to the eighties, because... well, because A Visit to William Blake's Inn looked like a manageable read. Walk before I run, etc.

It also happens to be an excellent time to look back at the 1982 Newbery winner because for over thirty years it was the only book to have won both a Newbery Medal and a Caldecott Honor. This year, of course, Last Stop on Market Street duplicated that feat. Both books were total left-field choices for the Newbery, and both of them beat out some strong contenders for the gold medal (Ramona Quimby, Age 8, in the case of A Visit to William Blake's Inn).

I initially chose Visit as my 1980s selection because it's one of the few Newbery winners from the eighties that I hadn't read. Frankly, if it hadn't won the award, I wonder if it would have vanished into obscurity by now like so many other poetry books. In that sense, it's a winner very much in line with the original intent of the award: to encourage and reward excellence in American children's literature. It could be argued that it's the quirky books like this one that most need the signal boost that an award like this provides (though of course that's not a factor the committee would have taken into account).

And A Visit to William Blake's Inn is a strange little book, to be sure. It is a series of loosely connected poems about a child who goes to stay at an inn whose proprietor is the eighteenth-century poet (and painter and printmaker), William Blake. The inn is populated by the fantastical beings that Blake portrayed in his visionary creations. The verse is formal and metered, the imagery is vivid, and the tone swings back and forth between whimsy and melancholy.

Two things strike me as odd and gutsy about the idea of writing a book of children's poems inspired by William Blake. First: those are some big shoes you're trying to fill. Adult readers are necessarily going to be comparing your verse to Blake's, and that's daunting, to put it mildly. Second: it's going to be filled with allusions that your child readers will miss entirely. There is some chance the target audience (9-12-year-olds?) may have read "The Tyger," but it's unlikely they will have the familiarity with Songs of Innocence and Experience that would be required to fully appreciate this book.

And yet, it works. The poetry is not true Blake, but it's apparently good enough to have fooled a whole generation of teachers. As for the allusions? As we say so often in this field, the poems stand alone. You don't need to know the source material to appreciate these dragons, angels, tigers, and rats.

And so, though I am a huge fan of Beverly Cleary in general and Ramona in particular, I can't argue with the 1982 committee's choice. A Visit to William Blake's Inn is a rare jewel of a book, and it deserves its medal.

Posted by Rachael Stein at 6:12 PM