The Winner's Circle: Shadow of a Bull, by Maia Wojciechowska (1965) 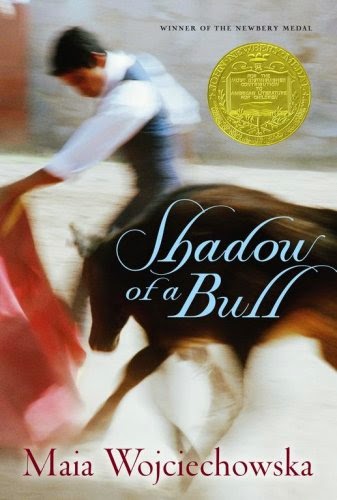 Juan Olivar was a legendary bullfighter, the greatest -- and maybe the only -- pride of the small town of Arcangel, Spain. He died of a fighting injury at the peak of his career, but the town -- dominated by statues of Olivar, home of a museum honoring his legend -- has never forgotten him. Instead, it has pinned its hopes on his son, Manolo Olivar, who everyone knows will grow up to follow in his father's footsteps.

Manolo, however, knows something that no one else in town does: that he, the son of the great Juan Olivar, is a coward. How can he overcome this failing? How can he be certain that no one else knows his fear? And why must he be the one to take up his father's legacy?

Shadow of a Bull marches firmly, inexorably, from this initial setup to Manolo's moment of truth. The language of the book brilliantly captures the feeling of a dusty, impoverished country town, one that has staked its future on a child. The focus is narrow, the supporting characters few. It's particularly noteworthy that the townsfolk who take it upon themselves to supervise Manolo's bullfighting education are only ever referred to as "the six men"; they form a sort of Greek Chorus, commenting on the action while at the same time serving as a symbol of the town's willingness to strip away the individual identity of any one person in the service of its dreams.

The Newbery winners of the 1960s are a curious list. It was a time of transition in children's literature, and the Newbery was given to some books that feel decidedly modern (The Island of the Blue Dolphins, A Wrinkle in Time, From the Mixed-Up Files of Mrs. Basil E. Frankweiler), as well as to some that clearly belong to the previous generation (Onion John, The Bronze Bow). Shadow of a Bull is more of a piece with the more "old-fashioned" books; using bullfighting as a way to talk about coming of age is a choice few children's authors would make today, and the world that Manolo inhabits is one of traditional concerns and values. In structure, theme, and "feel," if not in setting or plot specifics, the Newbery winners that it reminds me most of are books such as Young Fu of the Upper Yangtze (1933) and Call It Courage (1941).

It's fair to say, I believe, that Shadow of a Bull is not a novel that takes a lot of risks; to compare it to the other two best-known Newbery-eligible books of its year, it attempts neither the confrontational realism of Harriet the Spy nor the epic ambition of The Book of Three. The trade, however, is that Shadow does what it does almost perfectly. It's tightly-written and well-paced, a tiny jewel of a novel.

Maia Wojciechowska was, by all accounts, a fascinating woman -- a refugee from Poland who, in addition to winning the Newbery, worked as a private detective, played professional tennis, translated for Radio Free Europe, and yes, actually fought a bull in the ring. Her writing career spanned more than four decades, but Shadow of a Bull was the only one of her 19 books that took a major ALA award. If it's not the book that would win if we re-awarded the 1965 Newbery (that'd be The Book of Three, if they let me make that choice), it's still a fine novel, one that perhaps should be better-regarded than it tends to be.
Posted by Sam Eddington at 12:05 PM