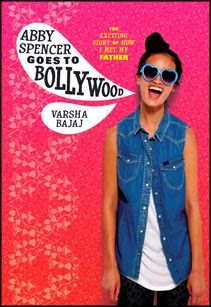 Abby Spencer is thirteen years old and has never met her father. However, her life is turned upside down when she learns his identity -- and that he's a famous film star in Bollywood. Soon, she's on an airplane by herself to meet him in Mumbai, which is only the start of her cross-cultural adventure.

Abby Spencer Goes to Bollywood is the first novel by Varsha Bajaj, whose previous work has been in the picture book format (How Many Kisses Do You Want Tonight?, T is for Taj Mahal). It's fun and breezy -- I think plenty of kids will enjoy it -- but not really Newbery material. The plot arc is too predictable, the characters too flat, the ending too tidy. It's also uneven thematically: the contrast in Mumbai between lavish wealth and crushing poverty is noted several times, but there's not much of a payoff.

And yet, I feel like this is an important book to take note of. In a year where there's been so much discussion of (the lack of) diversity in children's books, Abby Spencer, with its biracial heroine learning to embrace the South Asian part of her heritage, is more than a little timely. Varsha Bajaj is originally from Mumbai herself, and did not emigrate to the United States until she enrolled in graduate school. Her descriptions of life in India are those of an insider, and were my favorite part of the novel. It's well worth purchasing for those reasons alone.

I haven't read anything about plans for a sequel (the only forthcoming title listed on Bajaj's website is another picture book), but I'd be surprised if this is the last we see of Abby. I hope that it isn't -- and I hope that her adventures find a wide audience.


Published in March by Albert Whitman & Company
Posted by Sam Eddington at 2:01 PM