2015 Contenders: The Crossover, by Kwame Alexander 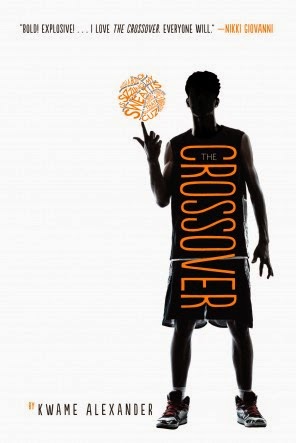 After I read the first three pages of The Crossover, I was excited. Here, perhaps, was another verse novel I could get behind. The vibrant, rhythmic poetry bounced like a basketball, and the voice of Josh Bell, the narrator, was clear and confident. I was curious to see where his story would go.

The problem is, those first three pages are the high point of the book. Maybe it wasn't possible to tell the whole story in that cadence, but I felt that -- with a few notable exceptions, most of which described on-court action -- the novel got prosier and prosier as it went along. The argument could be made that this mirrors the way Josh's swagger and confidence are shaken as the narrative moves along, but I'm not sure I would go that far. I just felt like Kwame Alexander had led with his best material.

I also had one of the problems that I almost always experience with verse novels, which is that the characters felt flat. Josh is a three-dimensional person, but even the secondary characters -- Josh's twin brother Jordan, Jordan's girlfriend Alexis, the boys' parents -- felt very one-note, and the tertiary characters barely registered for me at all.

The book already has a significant number of defenders, however (five starred reviews, plenty of positive blog notices, and cover blurbs from a laundry list of first-tier authors). To be fair, there are things it does very well. Alexander certainly knows his basketball, and anyone who's a hoops fan will be able to pick up on that right away. It's a quick read, and if the plot doesn't offer much in the way of surprises, neither did any of Matt Christopher's, and that never interfered with my enjoyment of his books. And it's nice to see characters who are so often caricatured as cruel and self-absorbed -- exceptionally skilled middle-school athletes -- treated with dignity and respect.

It's interesting to compare The Crossover with my pick for the best verse novel (and possibly the best book of any kind) of the year so far, Caminar. In purely literary terms, I think Caminar is by far the superior book, a technical tour de force with more assured verse, a much stronger protagonist, and more polished use of metaphor. I would champion it for Newbery consideration, and I would not do the same for The Crossover. And yet, I think for most readers, The Crossover will be much easier to love. It's a more accessible story, set in a more familiar environment, and I think it will be an easier book to find a reader for.

As I said, that doesn't mean I believe The Crossover should appear on the Newbery list. I do think, however, that it deserves to be noticed, and to be put into the hands of children who will find much to love about it.


Published in March by Houghton Mifflin Harcourt
Posted by Sam Eddington at 3:33 PM