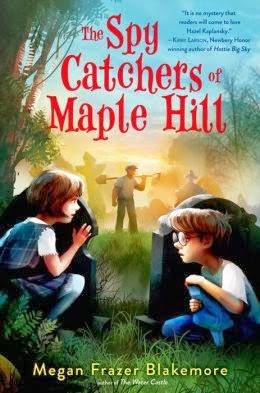 Hazel Kaplansky lives in Maple Hill, Vermont, at the height of the McCarthy era. Rumors are swirling that the local factory has been infiltrated by Communists, and a government investigation is underway. Since Hazel aspires to be a famous detective, she figures this is the perfect time to put her deductive skills into action. With the help of Samuel Butler, a new boy in town who may be hiding secrets of his own, Hazel sets out to get to the bottom of the nefarious communist plot, which she believes is centered around the town gravedigger.

Hazel is very clear about who she aspires to be like: Nancy Drew, Trixie Belden, the Hardy Boys. Many readers will likely see connections to Harriet the Spy as well, given Hazel's propensity for writing down everything about the members of her community in her notebook. I'll confess, however, that the character Hazel reminded me most of was the titular protagonist of Stephan Pastis' Timmy Failure books. Like Timmy, Hazel believes she is a brilliant sleuth; also like Timmy, Hazel consistently misreads situations, jumps to ridiculous conclusions, and ignores any evidence that doesn't fit her theories. The difference is that Timmy's (mis)adventures are played for laughs, while Hazel's take place in a deadly serious milieu of Cold War paranoia and small town nastiness.

Megan Frazer Blakemore displays the same love of layered mysteries and hidden secrets in The Spy Catchers of Maple Hill that she did in last year's The Water Castle. Spy Catchers, however, contains no supernatural or speculative fiction elements, and I think because of that -- and because the ending is much more straightforward than that of The Water Castle -- it feels very different tonally.

Ah, that ending. (Spoiler alert!) I'm just not that sold on the last fifty or so pages of this book. Everybody's secrets finally come out, but the manner felt more than a little overwrought to me. That Samuel's father never had a funeral seems odd to me, and that no one would tell Samuel that they were finally going to have one -- after everyone has been so concerned about his "fragility" for the whole book -- just doesn't feel plausible. Also, why does the gravedigger, Mr. Jones, disappear at the end of the book? It feels weirdly unmotivated, especially given his reasons for returning to Maple Hill in the first place.

The Spy Catchers of Maple Hill was a pleasant enough read, and I think it might well find more child readers than The Water Castle, given its more "traditional" plot. However, I think we already have several more solid Newbery contenders for this year.


Publication in May by Bloomsbury Children's Books / MacMillan
Posted by Sam Eddington at 9:52 AM