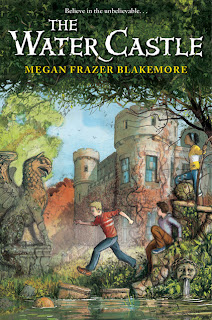 As The Water Castle begins, Ephraim Appledore-Smith's life is in a difficult place. His beloved father has suffered a stroke, and is a shell of his former self. He's stuck between his older brother, Price, a stellar athlete, and his younger sister, Brynn, an intelligent and precocious child. And on top of that, he's had to relocate from Boston to the small town of Crystal Springs, Maine, home of his family's ancestral house, the titular Water Castle.

Ephraim and his new friends, Mallory and Will -- representatives of three families with a complicated and troubled past -- begin working their way to the secrets of Crystal Springs and the Water Castle, in the hopes of finding the legendary Fountain of Youth. Ephraim's hope is that this will enable him to find a cure for his father's condition. The present-day story intertwines with another story from 1908, and other elements, such as Peary's expedition to reach the North Pole, the eccentric inventor Nikola Tesla, and mysterious levels of radioactivity in the area, start to form a sort of fugue. This is a complex, dense book, one that certainly excels in its elaborate, almost baroque plot.

For me, The Water Castle hit all the right notes. The characters are believable and three-dimensional, the themes are fascinating, and the book managed to take classic elements of children's literature -- the old house with hidden secrets, the found diary, the tantalizing map -- and recontextualize them. It's hard to say this early, but I fully expect to be discussing this novel for the rest of the year.

I think the biggest question about The Water Castle is going to be about its ending. The book presents all the necessary information to solve all of its mysteries and piece together its story in full, but there's no scene at the end where all of the parts are explicitly wrapped together. I fully expected someone to give the kind of final speech that mystery novels tend to contain, where the secrets are revealed and the motives made clear, but this isn't that kind of book. It allows the reader to have the satisfaction of putting all the parts together on their own, without confirmation. I think it's a brave strategy that works in this particular book, but I can already start to hear the arguments about it.

This is Megan Frazer Blakemore's first middle-grade novel, and I'd opine that it's a stunning one. I'd be surprised if this is the last time that you hear about The Water Castle in this space.


Published in January by Walker & Company / Bloomsbury
Posted by Sam Eddington at 1:13 PM