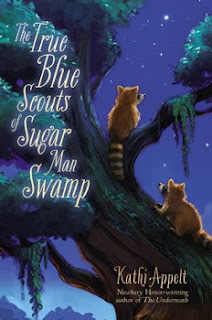 "I am not the person to review this movie. Perhaps you will enjoy a review from someone who disqualifies himself at the outset..."
~Roger Ebert, on Sex and the City (2008)

I can safely say that I am not the person to review The True Blue Scouts of Sugar Man Swamp. I disliked it intensely, but it's hard for me to figure out how much of that is the result of failures on the part of the book itself, and how much of it is simply because the book is built of tropes, settings, and characters that don't do anything at all for me. I will try to separate the two, but I feel like it would be unfair of me not to state my conundrum up front.

The plot involves a pair of raccoons (the Scouts of the title) and a twelve-year-old boy, who work in parallel ways to save Sugar Man Swamp from the twin threats of an overzealous land developer and a rampaging group of wild hogs. There are also angry snakes, a lost Chrysler DeSoto, an overnight radio host, cane sugar pies, and the Sugar Man himself, a sort of cryptid protector of the swamp with the unfortunate habit of sleeping very deeply, and for a very long time.

I'm largely immune to the charms of the literary deep south, but the setting is actually quite well done; the oppressive humidity, intolerable insects, and sultry laziness of the bayou all come to life. More problematic is the aw-shucks folksiness of the prose, which struck me as affected rather than charming -- especially when paired with an intrusive narrator whose closest point of comparison might be the voiceover guy from the old Dukes of Hazzard TV show. Rachael (who once made the mistake of trying to sell me on The Girl Who Circumnavigated Fairyland in a Ship of Her Own Making) can tell you that I have a long-standing aversion to intrusive narrators of any kind, but the one in True Blue Scouts felt particularly like someone was reading (and commenting) over my shoulder.

I didn't feel like the characterization was strong either. The villains (both human and porcine) reach near-Snidely Whiplash levels of cartoonishness, and in a year that's given us the careful nuance of The Water Castle and The Real Boy, I don't think that cuts it. The heroes felt a bit flat to me as well, but it was the treatment of the antagonists that struck me as especially dubious.

Finally, the pacing and structure of True Blue Scouts seemed questionable to me. This is a long book -- 371 pages in my ARC -- but it's cut up into 104 chapters, with most of the chapter breaks bringing a change of scene, disrupting the flow of the story. The pacing is leisurely, full of odd digressions and interludes that don't go anywhere, but the tone of the book is insistent, even alarmist, which made me feel rather like the novel was crying wolf at me for most of its duration. (This, by the way, was also my complaint about Keeper, Kathi Appelt's previous book, so make of that what you will.) I was particularly disappointed in the lack of payoff for the story elements involving the ivory-billed woodpecker, which was treated as a major motif for most of the book, but which just fizzled out at the end.

Many of the early reviews of True Blue Scouts are overwhelmingly positive -- Monica Edinger loves it, and it's received stars from Publishers Weekly, Booklist, Kirkus, and School Library Journal. I don't think it works, and I wouldn't put it on my Newbery list, but as I said at the beginning, I'm not really the right reviewer for this book, so feel free to take my opinion with as many grains of salt as you have available.


Publication in July through Atheneum / Simon & Schuster
Posted by Sam Eddington at 4:15 PM