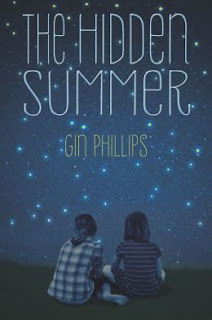 Nell and Lydia, a pair of Alabama girls on the cusp of adolescence, are best friends. Their mothers used to be friends too, but they've had a fight, and now Nell and Lydia aren't supposed to see each other. Nell, however, has devised a plan -- they'll pretend to be off at summer school (Nell) and summer camp (Lydia), when really, they'll be spending their days together at the abandoned golf course. This is especially important to Nell, the narrator, who has a deeply troubled relationship with her mother, and doesn't really want to be at home.

It would be hard to provide a plot summary beyond that point, because The Hidden Summer is very light on plot. It's more than a little episodic, and it's so still that in places, it almost seems to have fallen asleep. But this melancholy tone poem is also gorgeously written and achingly emotional, a coming of age story that embraces the darkness as well as the light.

The book works because Gin Phillips is an excellent stylist, but also because the characters come fully to life. This isn't true only of Nell and Lydia, but of the minor characters at the edge of the plot, from the teenaged gas station clerk to Nell's latest stepfather. Some of these characters only take up a few paragraphs, but Phillips makes every word count, so we're never denied a clear picture of each person. Of course, the picture we get is always from Nell's point of view, but her strong, consistent voice makes the first-person narration effective.

Despite certain adventure-story elements (hiding out in the hollow dinosaur on the putt-putt portion of the abandoned golf course!), The Hidden Summer is a book that will likely have more appeal for contemplative readers than for adventurous ones. It reads a bit like a less ensemble-cast Criss-Cross, or a modern-day Breathing Room; even when something exciting happens, the focus isn't on the action, but on the impact on the characters and their relationships.

I've heard little fanfare about The Hidden Summer, and it may simply be too low-key to make an impression on the Newbery committee. However, it's a gem that it would be a pity to overlook.


Published in June by Dial / Penguin
Posted by Sam Eddington at 11:53 AM