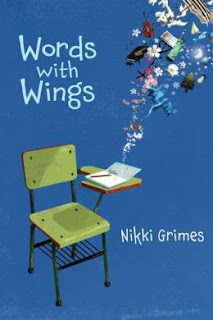 Gabby's parents have recently divorced, and she's about to start at a new school as Words with Wings opens. She's unhappy about both of those things, but finds solace in her daydreams, which generally take single words as their jumping-off place. But how can Gabby succeed at her new school when she always has her head in the clouds?

It's not a bad premise necessarily, but I have to confess that it's one that feels uncomfortably familiar. From Anne of Green Gables (1908), to Captain David, by Miriam Klugman (1991), to last year's What Came from the Stars, children's literature is littered with books featuring characters whose daydreaming and inattentiveness get them into trouble. Words with Wings slots a bit too neatly into this list, without bringing a particularly fresh perspective to a timeworn topic. Yes, the eventual response of Gabby's teacher, Mr. Spicer, is useful -- even inspiring -- but it's not necessarily enough to support an entire book.

Part of the difficulty, I think, is the format of the book. Words with Wings clocks in under 100 pages, and the fact that it's a verse novel means that a huge portion of that page count is white space. Gabby comes across reasonably clearly, but her parents, her new friend David, and even Mr. Spicer are all essentially ciphers. A book that treads such familiar territory lives and dies by the degree to which the story can present itself as individual, and I don't think Words with Wings really manages to escape the archetypal.

Now, Nikki Grimes is a skilled author (she won the 2003 Coretta Scott King for Bronx Masquerade, and has a mind-boggling four CSK Honors to her name), and so it's not as if Words with Wings is a difficult or tedious read. Some of the lines, indeed, are genuinely beautiful. I don't think it would be a particularly hard sell to a child reader who enjoys contemporary fiction and/or poetry. But I don't think Words with Wings rises to the level of "distinguished," and I don't expect to see it featured in the Newbery list.


Publication in September through WordSong / Highlights
Posted by Sam Eddington at 10:11 AM