2014 Contenders: The Fortune-Teller, by Paul B. Thompson 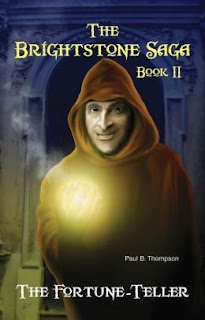 When last we saw Mikal and Lyra, at the end of The Brightworking, they had escaped the destruction of the Guild of Constant Working's Hall in the city of Oranbold, carrying with them Orichalkon, a magic artifact in the shape of a bronze head. However, we find out almost immediately upon beginning The Fortune-Teller that the evil wizard Harlano, Mikal's former master, is hot on their trail, trying to get Orichalkon back for his own nefarious purposes.

The Fortune-Teller has essentially the same strengths and weaknesses as its predecessor. It runs from adventure to adventure at full tilt, always keeping the reader entertained, but at the cost of some character and world development. This is a conscious choice on Paul B. Thompson's part, and I think it works well for an audience just learning to cut its teeth on fantasy novels. I would have preferred a book with more detail, even if it didn't move as quickly, but I understand the authorial decision at work here, and I can respect it. (The fact that there isn't a map to help with the somewhat confusing geography, however, is a serious omission.)

There are some series -- even fantasy series -- where beginning with a book in the middle isn't particularly problematic. I remember as a teenager starting Alan Dean Foster's Spellsinger series with the eighth book (Chorus Skating), and not having any real trouble picking up the storyline. However, a reader picking up The Fortune-Teller without having read The Brightworking will be at a severe disadvantage; this is a series that should be started at the beginning. Similarly, the book ends with a cliffhanger -- to get any kind of resolution, readers will have to continue to the third (and final) entry in the series, The Battle for the Brightstone, which is scheduled to be published in September.

I don't expect The Fortune-Teller to earn any ALA awards -- it's designed to be a popular, rather than a literary book, and it's not the kind of novel that has hidden literary depths. But it's a lot of fun, and beginning fantasy readers could do a lot worse than this series.


Published in January by Enslow.

Posted by Sam Eddington at 2:38 PM