The Winner's Circle: The Matchlock Gun, by Walter D. Edmonds (1942) 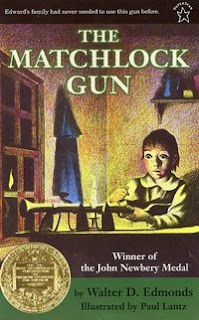 Walter D. Edmonds won the Newbery in 1942, the Lewis Carroll Shelf Award in 1960, and the National Book Award in 1976, but these days, he's mostly remembered because John Ford made a famous film adaptation of his 1936 adult novel, Drums Along the Mohawk. As Rachael noted, Meindert DeJong can sympathize with one's reputation deteriorating over time, but it's still fascinating to me how quickly someone can be relegated to the footnotes of history.

The Matchlock Gun isn't a very well-remembered Newbery, and I've had a hard time trying to figure out what to make of it. It comes billed as a novel, but it's barely a short story; my copy is 50 pages long, and though it does come with a four-page foreword by the author, it also uses somewhere in the neighborhood of 20 pages on illustrations. It's extremely brief, and it simply doesn't have the room for subplots or advanced character development.

The story, which Edmonds assures us is in its essential points a true one, takes place in 1757, "when the French were still leading Indians out of Canada against the settlers." The father of the Van Alstyne family is away on a militia defensive action, and when a group of Indians reaches the house, the only way for the rest of the family to save themselves is for Edward, a 10-year-old boy, to follow his mother's plan and use the titular firearm, a piece obsolete even at the time that is over six feet long and has no trigger.

So it's a war story -- albeit one set during the French and Indian war, which isn't one that's much remembered. My guess is that its theme of implacable invaders attacking the homes of innocent people was one with especial resonance in the immediate aftermath of Pearl Harbor, when it won the Newbery. The story is told, however, in the style of a family legend -- the sort of thing that would usually be preceded by, "Tell us again about the time great-great-grandpa Edward had to fire the matchlock gun." Its focus is so insular, indeed, that only a couple people outside the family even have speaking lines. We're being invited into the Van Alstynes' inner circle here, and so this isn't a neutral look at the events portrayed.


Edmonds was a master prose stylist. His way with metaphors and images is easily the best thing about the book; he uses them to create a sense of family warmth, as well as an atmosphere of creeping dread as the attack becomes increasingly imminent. The book is, however, highly problematic in its depections of both Native Americans and African Americans; Oyate hates it, and though I think it's a bit disingenuous to leave out the fact that the book is set during a war, the examples that they cite in their review are every bit as ugly as they're made out to be. Even given the book's extremely limited scope, its descriptions of its non-white characters are over-the-top unpleasant, and it's impossible for a modern reader to overlook. I know I was made uncomfortable by them as I was reading.


So what are we to make of a book with moments of great beauty that nonetheless contains such distasteful flaws? I don't even know, though I wouldn't recommend this to a child. It represents both the best (love of family, great personal courage) and worst (demonization of anyone "other," complete acceptance of violence) in the psyche, history, and literature of America.

As for its Newbery, the other best-remembered book of the year was probably Little Town on the Prairie. It's been ages since I've read that one, and I know that that particular series isn't unproblematic in its racial characterizations either, but it probably would have been a better choice than The Matchlock Gun. If anyone has a better suggestion though, I'd be more than glad to hear it!
Posted by Sam Eddington at 4:14 PM