2013 Contenders: The Moon Over High Street, by Natalie Babbitt 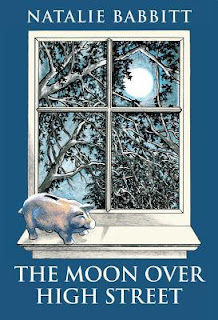 Anton Boulderwall is an aging inventor and factory owner who lives in the best house on High Street, the fanciest thoroughfare in Midville, Ohio. Myra Casimir is a schoolteacher who also lives in Midville, but in a much more proletarian neighborhood. And Joe Casimir is a boy who comes to stay with Myra, his distant relative, while his grandmother is recovering from a broken hip, only to find himself the unlikely focal point of Midville's class tensions. Mr. Boulderwall wants to adopt Joe and leave him the factory -- but this would require Joe to move to High Street and turn his back on his dreams of becoming a scientist who studies the moon.

It's all fine as far as a setup goes, a sort of more fraught take on Charlie and the Chocolate Factory or something of that nature. However, the execution leaves a fair amount to be desired. The theme of rich vs. working class (no one in the book is really "poor") is hammered into the ground by the dialogue and narration, and especially by Mrs. Boulderwall, a humorless shrew who exists largely to make derogatory statements about Joe such as "He's just not our kind of people" and "He's nothing but hired help to me." Even the book's title is less an indication of the setting than an unsubtle hint as to the direction in which Joe finally chooses to go. And, though Joe is the one who makes the decision, he's not the one who tells Mr. Boulderwall -- that falls to Gran, in a scene in which she and Mr. Boulderwall spend six pages trading cliches while the nominal hero of the book is offstage.

Although Mr. Boulderwall appears displeased with the result of that conversation, it's hard to see why. Mr. Boulderwall seems to have little interest in Joe as a person -- he likes Joe because of their shared Polish ancestry, and he finds it convenient that Joe's parents aren't living, but that's about it. Frankly, I found the section in which he insists that Mrs. Boulderwall set up another meeting with Joe without giving her any reason other than "I just want to see that boy again" more than a little creepy. However, Myra isn't a whole lot better; she tells Joe flat out that she sees him as some sort of substitute for the fiancee she lost in the Korean war, a man also named Joe. Only Beatrice, the girl next door, seems to have an interest in Joe that's based on anything internal to him.

Natalie Babbitt is, of course, a well-known figure in the world of children's literature; Tuck Everlasting is a minor classic, and Knee-Knock Rise won a Newbery Honor in 1971. I think this book will get a long look because of its author's track record -- many people had high hopes for it -- but I don't anticipate it showing up on any end-of-year shortlists or placing for any of the major awards.