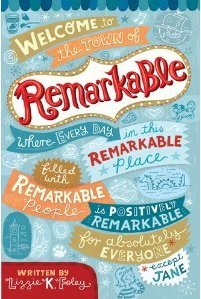 It's hard to be average when other people are exceptional. That's not only the subject of Remarkable, Lizzie K. Foley's debut novel, but also the reaction that I had to the book when I'd finished reading it.

Remarkable is a town in which everything and everyone is outstanding in one way or another. Well, everyone except Jane Doe, a ten-year-old with no distinguished traits of any kind, unless you want to count being the only student in town not enrolled at the School for the Remarkably Gifted. But despite her ordinariness, she finds herself being drawn into a series of adventures involving pirates, a missing composer, a bell tower, a weather machine, and a lake monster.

As I read, I found my mind drifting back to a pair of other books: The Extraordinary Adventures of Ordinary Boy, Book 1: The Hero Revealed, William Boniface's 2006 novel, and Whales on Stilts!, M.T. Anderson's 2005 kickoff for his "Pals in Peril" series. Boniface's book was also about a main character with no special abilities in a society where that was highly unusual. However, its comic-book setting was bright and fun, and its title character was willing not only to involve himself in his own story, but to find his own unique skills -- in his case, a keenly observational mind and the ability to make careful deductions. And Anderson's book had a fascinating setting too -- a universe in which children's series fiction of all stripes is quite true -- and a heroine in Lily Gefelty whose uninteresting surface appearance gave way to complexity and discovery of her own gifts as the story went along.

Both of these, to me, stood in contrast to Remarkable. Its fabulistic setting felt oddly generic, and Jane is a frustratingly passive heroine who contributes almost nothing to the denoument of her book. Even her realization of the central plot twists, which seemed to me to come about 50 pages too late, isn't necessary --  Detective Sly and Grandpa have already figured them out as well. In fact, I think the argument can be made that Grandpa is the real hero of the book -- his kindness and sensitivity for the welfare of others shine brighter than anything about Jane, despite the fact that he's even more ordinary than she is.

This isn't to say that Remarkable is a bad book, because it isn't. Several of the supporting characters, including the gleefully chaotic Grimlet twins and the repressed savage Ms. Schnabel, are memorable indeed, and the prose is humorous and tidy. It was fine as far as it went, no question about it. I just couldn't bring myself to love it when I'd read (and could call to mind years after reading) two superior books that took the basic theme and did a much better job with it.

Publication is in April though Dial (Penguin). It's being promoted heavily by the publisher, and I think it's possible it will be a popular hit. I wouldn't Newbery-shortlist it, but I'm curious to see other critical reactions to it.
Posted by Sam Eddington at 3:54 PM