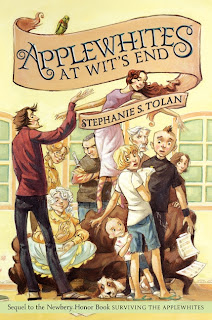 You can think of it as the jumbo-sized version of "let's put on a play and save the old school" -- let's put on a summer camp and save our family homestead! As Applewhites at Wit's End opens, the Applewhite clan -- a three-generation collective of creative types, all but one of whom are family members -- have lost all of their money due to accounting fraud, and are in danger of losing Wit's End, their combination home/studio/playhouse, which they've built from an abandoned motor lodge. In order to raise the required money, they hit on the idea of running a summer camp for creative children, even though none of them have any experience at all in doing so.

It's all a setup for a warmhearted and terrifically funny excursion, seen alternately through the eyes of E.D., a 13-year-old girl who's the only one of the Applewhites without a creative talent, and Jake, a teen with a troubled past whose luck and outlook have changed since being taken in by the Applewhites. The book works as an ensemble comedy, a paean to creativity, and even as a bit of a mystery story. The setting and references are firmly present-day, but in its spirit and tone, it reminded me of a lost classic from the past, something that would sit comfortably on a shelf alongside Pippi Longstocking, Ginger Pye, and The Story Girl. It's the kind of book that I firmly believe I would have loved as a child -- and that, even as an adult, I genuinely enjoyed reading.

The novel is a sequel to Stephanie S. Tolan's 2003 Newbery Honor book Surviving the Applewhites. I haven't read that one, but I didn't find that it mattered. The tongue-in-cheek front matter, which includes a family tree and an introduction to the "cast of characters," served well enough to acquaint me with the Applewhites, and the few plot points from the earlier book that seemed to make a difference were quickly recapped in the text. At no point when reading it did I feel that it didn't stand alone.

As a side note, it occurred to me that, if Mary Higgins Clark or John Grisham take ten years to write a sequel, people are often willing to accept that -- but if a children's author takes ten years, the original audience has grown up, and so needs to some extent to be rebuilt. Perhaps this is one reason that Tolan was so careful to make the book easy to read for someone unfamiliar with the earlier work.

Official publication is in May through HarperCollins Children's Books. I'm putting this one on my Newbery short list. I don't know if the committee will be willing to give the award to a humorous book twice in a row, but I'd be intensely surprised if it didn't at the very least make the Notables list.

Posted by Sam Eddington at 1:14 PM