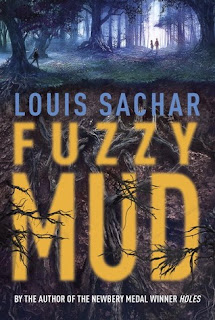 Marshall Walsh's life has steadily been getting worse for quite some time, and today, bully Chad Hilligas has promised to fight him after school. Not wanting to engage, Marshall -- along with his neighbor Tamaya Dhilwaddi, who walks to and from school with him -- takes a shortcut through the woods, even though they're not supposed to do so.

What happens next threatens the lives of all three children, as well as those of everyone else in the town of Heath Cliff, Pennsylvania -- and possibly further afield. Something has happened at SunRay Farm, a place where eccentric scientist Jonathan Fitzman has been researching alternative biofuel, and that something has terrifying repercussions.

The most obvious point of comparison for Fuzzy Mud is probably Carl Hiassen's children's novels, given their shared concern for environmental themes. The book that Fuzzy Mud most reminded me of, however, wasn't a children's book at all, but rather, The Andromeda Strain, Michael Crichton's 1969 techno-thriller about a deadly, mutating pathogen. Both books ask hard questions about the ways in which technological progress can accidentally have deadly results, and both are threaded with nail-biting tension. Indeed, I thought the menacing tone of Fuzzy Mud -- especially in the scenes that take place in the woods -- was its finest feature.

To address what I felt was the book's biggest weakness, it's useful to go back to the Crichton comparison. (Spoilers follow.) The plot of The Andromeda Strain starts with the scenes of horror in the small town where all but two of the inhabitants have been killed by the title infection. Once it's discovered that a pathogen is involved, the story shifts to the scientists who are trying to understand the infection and develop a cure. Fuzzy Mud pulls off the equivalent of the first part with aplomb -- the scenes in which Tamaya slowly realizes what is happening to her are stunning, and the moment where she finds a nearly-dead Chad in the woods is utterly brilliant. However, the equivalent of the second part felt perfunctory and rushed, and I think the reason is that, because Sachar doesn't want to cut away from his child protagonists for very long, and all three of them are in the hospital and incapacitated, he's essentially painted himself into a corner.

In order for the second part to feel like it's of equal weight to the first, Sachar probably would have had to add in some other child characters who might have been able to be directly involved in the search for a cure -- or, possibly, to be willing to spend more time with secondary characters like Monica or Marshall's family as they deal with the quarantine under which the town is placed. As it stands, the novel feels almost more like one of those 1950s-era short films for students, the kind that told half of a story with thorny moral and ethical problems, and then stopped to ask "What would YOU do?" This is the rare 190-page children's book that really cries out to be longer.

All that said, Fuzzy Mud is still a very good book. As far as Sachar's work goes, however, it's not on the level of Holes or Sideways Stories from Wayside School, and as far as this year's crop of books goes, I don't think it reaches the heights of Circus Mirandus or Moonpenny Island (among others), and I don't expect it to take home the Newbery Medal.