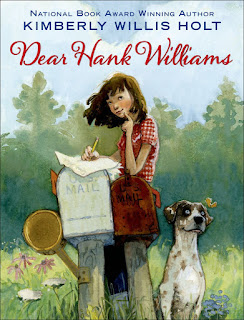 The year is 1948 in the small town of Rippling Creek, Louisiana (which has several creeks, none of which are particularly rippling, come to think of it). Tate P. Ellerbee’s new teacher has assigned her students to strike up a correspondence with a pen pal. Tate knows exactly who she’ll write: her favorite singer, Hank Williams, whose music career is just kicking off with a regular gig on the Louisiana Hayride radio show. Tate tells Mr. Hank Williams about how she lives with her Aunt Patty Cake and her Uncle Jolly, how she wants a dog more than anything, and how she’s secretly practicing to sing in the Rippling Creek May Festival Talent Show and (hopefully beat that spoiled brat Verbia Calhoon).

I found several things about the novel quite interesting:

1. It’s historical fiction that really skirts around the edges of the era it’s portraying, rather than tackling it head on. WWII, which has just ended, is only mentioned tangentially, and Rippling Creek’s marginalized African American community is only touched upon. These two things alone could be the subjects of their own books, but Dear Hank Williams is about Tate, who is eleven years old, and her family, who aren’t really affected by those issues, so they become backdrop to the primary drama which is centered around school, and talent shows, and listening to the radio.

2. It takes place during a golden age of music that is dear to my heart: Radio Days. A time when, if you wanted to hear your favorite artist, you had to tune into the radio, maybe at a certain time, on a certain station. A time when procuring and owning a recorded piece of music was extremely special. A time when we had to physically interact with our music (turn the dial on the radio, put the needle on the record). A time when listening to music was a social event you experienced with your friends and family. A time when you could hear someone singing and never know, or care, what they looked like. Vinyl, and independent artists, are enjoying a bit of a resurgence lately, but for the most part all of this is just gone. You can own music as fast you can click “download.” You can easily push a button and listen to it on your headphones. You can know, and judge, what the artist looks like instantaneously. In fact, many people are given record contracts for seemingly no reason besides that their image is marketable! I wonder if the children who’ll read Dear Hank Williams will appreciate this. And I wonder too if they’ll be able to put Hank Williams, an old time country singer, with a proclivity for yodeling, into the context of his time period. Tate is basically writing a pop star. She is basically writing to Justin Bieber (but 2010 Justin Bieber who was kind of adorable, not 2015 Justin Bieber who is kind of ridiculous).

3. Tate is an unreliable narrator, but the untruths she tells are told with such sincerity you forgive and forget her unreliability. It’s quite an achievement on author Kimberly Willis Holt’s part to create a character so likable that you aren’t mad at her for lying, and despite her giving you a totally justifiable reason to mistrust her, you just don’t want to.

4. The book is written in the epistolary style, and is chock full of the folksy charm that seems to automatically accompany any novel set in a small town America, which readers have been known to either love or hate, with little gray area in between. I liked it, but, to quote my favorite bloggers, Sam and Rachael, “your mileage may vary.”

5. The book tackles some tough issues. Substance abuse, abandonment, and death are all explored as Tate journals her feelings in letters to Hank Williams. Her revelations are unexpected, but not unsurprising, and the serious themes are treated with the dignity they deserve.

I wouldn’t be surprised if this book gets attention from the Newbery committee. It can be hard for a group of opinionated librarians (and honorary librarians) to agree on what’s best. I feel Dear Hank Williams could be a unifying book with its many aspects worth celebrating.

For now, let’s channel Tate Ellerbee, and listen to some of that fine music by the late, legendary Hank Williams Sr.