2016 Contenders: The Penderwicks in Spring, by Jeanne Birdsall 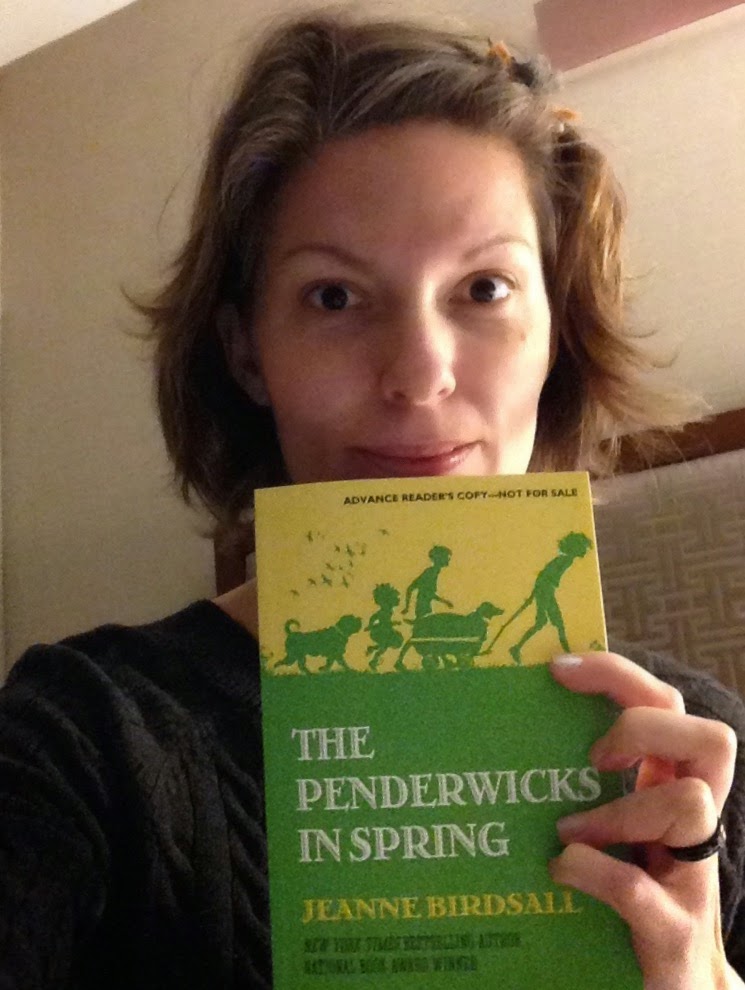 At long last, we have received news of the Penderwicks.

Jeanne Birdsall has consistently avowed that it takes her three years to write a Penderwicks novel. The Penderwicks at Point Mouette came out in 2011. So (allowing for the vagaries of the editing and publishing process) the next volume of Penderwickia will arrive in stores next month right on schedule.

Interestingly, even more time has passed within the world of the Penderwicks than in our world. When last we saw them, Rosalind, Skye, Jane, and Batty were 13, 12, 11, and five years old. Ben was “too small to be without his mother.”  As The Penderwicks in Spring opens, Rosalind is away at college, Skye and Jane are in high school, and Batty and Ben are in fifth and second grade, respectively. Aging the characters up like this is an interesting – even unusual - approach to an ongoing series. There’s plenty of precedent for doing it the other way – Joey Pigza being last year’s most notable example – but Birdsall has always been clear about her vision for the series, which seems to involve seeing the sisters all the way to adulthood.

It could be difficult to balance that goal with her other priority, which is to keep the series solidly in middle grade territory. In a 2013 Horn Book article, she addressed the importance of keeping middle grade separate from YA:  “But in terms of maintaining the boundaries of the middle grade category — so that children know where to go for books that address their particular lives — it matters a great deal. “ In practical terms, that seems to mean that Penderwicks novels will always focus on the characters who actually fall within the middle grade age range. In The Penderwicks in Spring, that would be Batty and Ben. Skye, Jane, Rosalind (and Jeffrey, and even Tommy Geiger) are present, but in the background. The story is told exclusively from Batty and Ben’s points of view.

As a reader and fan, it took me a while to get on board with that approach, because it requires Birdsall to alter her usual narrative pattern. The Penderwicks exist very much in the tradition of the family novel, which has a clear structure: chapters alternate between the points of view of the siblings, and each sibling has a conflict to overcome (sometimes in addition to an overarching family conflict). That’s how it worked for the Little Women a century and a half ago, and that’s how it worked for the Family Fletcher last year. The Penderwicks in Spring is different. It’s all Batty. Ben is there too, but really, most of Ben’s conflicts have to do with worrying about Batty (and keeping her secrets).

So it’s Batty’s show, and a dark, dark show it is. There has always been an undercurrent of melancholy in the Penderwicks’ world, but in this book, it actually pulls us under, right along with Batty.  She alone has to wrestle with the central tragedy at the heart of their family, and as Birdsall plunged us into those icy emotional waters, I really wasn’t sure she was going to be able to pull us back out effectively.

Reader, she does. Though Batty’s quiet struggle is at the heart of the book, it echoes through the rest of the family and their friends (Jeffrey, the Geigers), and in the end, it is the whole Penderwick tribe that emerges stronger for it. When spring comes to Gardam Street, they have earned it.

This is not to say that the book is an unqualified success. Most notably, I’m not sure that Ben is as strong a character as his older siblings, and I was disappointed that he didn’t have more of his own story (in a 350 page book, you would think there would be room for it).

Overall, though, I think this is a satisfying penultimate volume in the Penderwick saga. There are welcome moments of levity (provided by Jane’s and Rosalind’s ridiculous gentlemen suitors and Batty’s shabby dog-walking charges), as well as the unflinching emotional authenticity we’ve come to expect from Jeanne Birdsall.

(As for Newbery? It’s a long shot. Despite being so temporally separate from its predecessors, I don’t think the book works without previous experience with the Penderwicks.)

Publication in March, 2015, by Alfred A. Knopf Books for Young Readers
Posted by Rachael Stein at 8:33 AM

Email ThisBlogThis!Share to TwitterShare to FacebookShare to Pinterest
Labels: 2016 Contenders