2015 Contenders: If it Rains Pancakes, by Brian P. Cleary 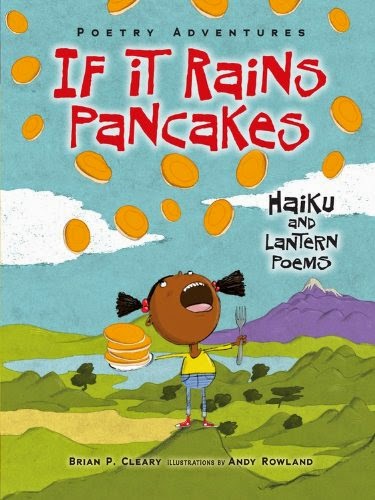 If it Rains Pancakes is an interesting hybrid volume: part book about poetry, part book of poetry. It begins with an introduction to what a haiku is, followed by several examples of the form. This process is then repeated for the lantern, another Japanese-derived poetic form.

If I were teaching a poetry class or unit, particularly for elementary school children, I think I'd love If it Rains Pancakes. The explanations of the forms are simple and clear, and Brian P. Cleary's poems that follow show how flexible each form is. In such a setting, this book would be perfect.

As a "contribution to literature," I'm not sure the book is quite as effective. Some of the poems are certainly gems -- "The Mind," with its clever take on memory, was my favorite, and one I think deserves to be anthologized. Others are perhaps less creative, if certainly serviceable. I did think that, taken as as a literary work, If it Rains Pancakes wasn't on the same level as Santa Clauses or Winter Bees, two other volumes of poetry that we've looked at recently.

I will also confess that I was a bit bothered by the fact that every poem in the haiku section is given a title -- not something as unobtrusive as the dates that accompany each poem in Santa Clauses, but a title that states the theme or setting of the piece. Very few published haiku have titles, and in fact, the prominent haiku-themed poetry journals look highly askance on the practice. (Modern Haiku strongly discourages titles, for instance, and Haiku Journal won't even accept submissions with titles.) It's a small issue, to be sure, but it felt like an important one to me.

There's a possibility that If it Rains Pancakes will make this year's Notables list; it's among their final nominations, and I'm curious to see if it makes that last cut. I doubt it will show up in the Newbery committee's selections though.


Published in May by Millbrook / Lerner

Posted by Sam Eddington at 5:55 PM