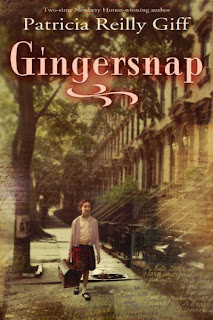 It's 1945, and Jayna's brother Rob has gone off to war in the Pacific. Since he's her only living relative, she's staying with the landlady during his tour of duty. But a mysterious ghost and an old recipe book lead her on a quest that takes her away from upstate New York and into the heart of Brooklyn in a search for family.

It's a winning plot idea, a supernaturally-tinged take on the classic themes of books like Cynthia Voigt's Homecoming. However, the book suffers from a number of the same problems that plagued Giff's previous novel, Hunter Moran Saves the Universe. Primary among them is the fact that the book simply doesn't have the space that it needs to accomplish what it sets out to do. It clocks in at under 150 pages, and that's just not enough room.

Too many plot points simply happen, with little setup, and precious little description. Even the most heartfelt of conversations in the book, around which the entire plot hinges, are unfortunately underdone. This has the secondary effect of making it so that none of the characters other than Jayna really seem alive, or fully three-dimensional. Each of them has a defining characteristic or two, but they don't seem to go deeper than that. And the ending of the book is sapped of its emotional strength by the fact that 1) it too is minimally described, and 2) we haven't really become invested enough with the characters to care. There's also a lack of explanation of some of the supernatural events, which I think is a stylistic choice, but for me at least, it didn't make it atmospheric or clever; instead, I found it maddeningly vague. And, though the book includes plentiful recipes, none of them are actually usable, given that, for instance, quantities of ingredients are either left out altogether or given in nebulous approximations. I know that it's supposed to recreate the feeling of wartime, when many ingredients were heavily rationed or unavailable, but I don't really think it's necessary or successful.

In the end, Gingersnap felt to me like a missed opportunity. I like the set-up, but I think that the execution just isn't solid enough to make it work. Reactions have been mixed; Kirkus and The Children's War, for instance, were positive, but much of the discussion over on Goodreads hasn't been nearly as complimentary. It may well have an audience, but I don't expect to see it reach this year's awards lists.