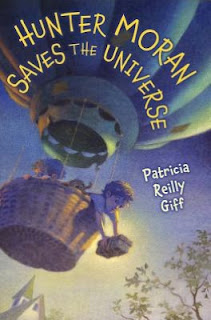 The idea of children stumbling across a diabolical plan is one that's had special resonance through the years. From Treasure Island to this year's Liar & Spy, children's literature is full of youthful characters who have uncovered -- or at least, believe they have uncovered -- some kind of dastardly plot, something that they must prevent in order to Save The Day.

Hunter Moran is such a child. By piecing together garbled telephone conversations, mysterious notes, and other sundry clues, he and his twin brother Zack have become convinced that the local dentist, Dr. Diglio, is scheming to detonate a bomb and destroy the town. It thus falls to them to stop him, while trying to stay out of trouble at home, keep an eye on their five-year-old brother, Steadman, and help prepare for the yearly festival, Tinwitty Day.

It's certainly a promising setup, and parts of Hunter Moran Saves the Universe are suitably madcap, living up to the idea. I liked Hunter's first-person narration. However -- and this is a criticism I rarely make -- the book simply isn't long enough.

It's barely 125 pages, and yet, in addition to everything else I've mentioned, it shoehorns in three additional Moran siblings, an attempt to hack their dad's computer, an awkward "love interest" subplot, a sketchy greengrocer, Zack's cello career, an annoying dog, a priest with a green thumb, and several other things I've probably forgotten. In order to hit all the points, the book maintains a frenetic pace, skimping on detail, and throwing characters at the reader so quickly that I had difficulty keeping track of them all. Some of the plot threads, such as the twins' mock funeral for Zack's sub-par report card, never really get a resolution at all, and some of those that do rely heavily on Steadman's near-superhuman ability to be seemingly everywhere at once.

I wanted to enjoy Hunter Moran, especially since it's by Patricia Reilly Giff, a two-time Newbery Honor medalist (Lily's Crossing, 1998; Pictures of Hollis Woods, 2003), and a major figure in American children's lit. But I think there's just not enough of it to make it successful, and I would be highly surprised if it were to earn serious consideration from the Newbery committee.


Publication in September through Holiday House.
Posted by Sam Eddington at 3:02 PM