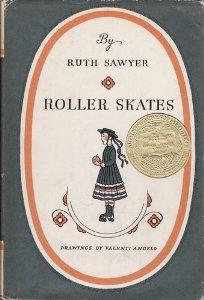 Roller Skates is the story of ten-year-old Lucinda Wyman's year of "orphanage," as she calls it, as her parents go off to Italy for her mother's health, and she goes to stay with a pair of family friends. Freed from the shackles of her stifling upper-class home life, Lucinda and her roller skates spend the year exploring 1890s New York City, making friends with everyone from the local policeman to the Rags-an'-Bottles man.

The novel is highly episodic; though it has a strong overarching theme -- the almost Rousseauian exuberance and perceptiveness of childhood when unrestrained by the stuffy customs of adulthood -- it doesn't have much in the way of a plot. Instead, we follow Lucinda through a series of interconnected vignettes, as characters and locations are woven into a vibrant tapestry of an idealized Gilded Age city. Ruth Sawyer's prose is lovely, and the massive army of characters are for the most part excellently differentiated, especially for a book that's less than 200 pages long.

Roller Skates does suffer from a bit of period piece-ness. It has racial attitudes that, though fairly progressive for the 1930s, aren't modern, as when Lucinda fantasizes about being born an American Indian, or when everyone refers to one minor character simply as Black Susan. It's a bit alarming as well how often Lucinda simply runs off to have an adventure with some grown-up that she's only met once, though the world of Roller Skates is much more like a more urban Anne of Green Gables than one that would involve Nancy Grace.

Or at least, it is most of the time. Near the end of the book, Lucinda goes to visit one of her adult friends, a Chinese woman that (in a bit of uncomfortable exoticism) she refers to as Princess Zayda...only to find her body, stabbed to death in what it's implied was a domestic abuse incident. It's a horrifying moment, and one that's tonally very much at odds with the rest of the book. The consequences for Lucinda aren't anything like fully explored, and it strikes a jarring note.

Much better handled are the tender scenes where Trinket, the little neighbor girl who's become a close friend of Lucinda's, takes ill and dies. In particular, the passage where the family doctor takes Lucinda for a walk by the East River and tells her that Trinket is dead without using those words is gorgeous and heartbreaking.

So, it's not a perfect book, and it's one that has to be viewed through the right historical lens. It's still a great literary achievement, however, and almost certainly the best choice for the 1937 Newbery. Although Sawyer later published a sequel, The Year of Jubilo, and wrote the text for two Caldecott Honor books (The Christmas Anna Angel, ill. by Kate Seredy, 1945 Honor; Journey Cake, Ho!, ill. by Robert McCloskey, 1954 Honor), it's Roller Skates that's the primary foundation for Sawyer's reputation, and in my opinion, it's not a bad way at all to be remembered.
Posted by Sam Eddington at 3:15 PM