The Winner's Circle: King of the Wind, by Marguerite Henry (1949) 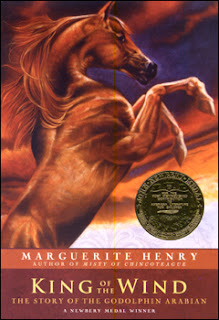 Marguerite Henry is a prime example of that group of Newbery winners whose winning book actually isn't their best or most famous. (Other authors I'd nominate include Beverly Cleary, Avi, and, depending on how we feel in another decade or so, maybe even Jack Gantos.) Misty of Chincoteague, Henry's 1948 Honor book, is much higher on the list of familiar and classic American children's books than her 1949 winner, King of the Wind.

Before I get much farther into this review, I should probably say that I've never been a "horse book" kind of reader. So if you love Black Beauty and National Velvet and The Black Stallion, you may well like King of the Wind more than I did. The novel's Goodreads page is full of people who swear by it, largely based on its excellent descriptions of horses and horse behavior.

I can't argue with that -- Henry clearly knew her horses -- but I still wasn't all that sold on King of the Wind. It's more or less based on the story of the Godolphin Arabian, a famous horse whose descendants were some of the finest racehorses of all time (including Man o'War, as the oddly disjunct introduction mentions), but it's so heavily romanticized and embellished as to remove any veneer of realism. We follow the Arabian -- known for most of the book as Sham -- from his initial home in the stables of the Sultan of Morocco, to the Royal Court of France, into disgrace as a cart-horse, and finally into triumph as the greatest sire of racehorses in all England. This whole plot relies heavily on chance coincidences, theatrical gestures, and soap-opera dialogue, and I didn't find it believable in the slightest.

Maybe that's just my resistance to the genre. After all, I've made no secret of my intense dislike of Smoky, the Cowhorse, and the arc of that book's plot, if not any of the specifics, isn't all that far off from King of the Wind. More troubling, though, is the book's lack of characterization. The Arabian is cared for and followed during the whole story by a mute boy named Agba, whose character exhibits almost no development through the novel, and who seems to exist in the story largely because Henry was unable or unwilling to follow the Will James model and have everything take place in the horse's point of view. (As far as I can tell, Agba seems to be entirely a product of Henry's imagination, as opposed to a real person that she worked into the story.)

So, no points for plot or development of characters from me, though Henry's prose is crisp, and the settings (the 1940's ideas about historical Morocco and Islam aside) are well developed. That said, although the 1948 publishing year was a pretty good one for picture books (Blueberries for Sal, Thidwick the Big-Hearted Moose, The Big Snow), it was a weak one for older readers -- maybe the weakest of the decade -- and so I wouldn't characterize King of the Wind as a mistake winner, or anything like that. As I've said before, all publishing years aren't created equal, and King of the Wind was probably as good a choice as anything else. But -- those kids who are really into horses aside -- I think it's a very minor entry in the Newbery canon.
Posted by Sam Eddington at 11:39 AM