2013 Contenders: The Hero's Guide to Saving Your Kingdom, by Christopher Healy 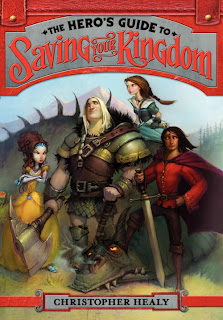 It's hard being Prince Charming -- people know some version of your story (which may or may not be accurate), but they don't know anything about you personally, not even your name. That's one of the problems faced by Princes Liam, Frederic, Duncan, and Gustav (of Sleeping Beauty, Cinderella, Snow White, and Rapunzel fame, respectively), but as The Hero's Guide to Saving Your Kingdom barrels along, they soon acquire any number of other problems, including trolls, giants, the King of the Bandits, and a witch intent on staging one of the largest and most spectacular demonstrations of evil the world has ever seen. Can they survive, save the world, and possibly even become real, genuine heroes?

The closest spiritual predecessor of Christopher Healy's novel isn't a book at all, but the Shrek series of films. Both are built on taking the premises of familar fairy tales, and then fracturing them with ironic characterizations, mugging one-liners, incongruous pop-culture references, and a tendency to take different tales and smash them together. Indeed, the film rights to The Hero's Guide to Saving Your Kingdom were sold before the book was even published, and it's hard to imagine that the eventual movie won't strongly resemble Shrek.

If you are willing to play along, The Hero's Guide is enjoyable enough. It's clever, and some of its twists, such as the portrayal of Sleeping Beauty as a teenage sociopath, are amusingly unexpected. I laughed in places, and I can see the book acquiring a devoted group of fans.

At the same time, I may have run out of patience for the whole Fractured Fairy Tales scene. Sure, you can create interesting effects by changing the structure of a familiar tale -- here's to you, The True Story of the Three Little Pigs -- but too often, these kinds of stories devolve into rote humor, winking sarcasm, and a sentimentality that's both cloying and superficial. The Hero's Guide is better at sidestepping these pitfalls than many other efforts in the same vein, but it doesn't do so completely. The ending of the novel, which all but ensures a sequel, also felt to me less like an organic outgrowth of the story, and more like a blatant attempt to make another book necessary.

It's possible that I'm projecting too many of my own feelings onto The Hero's Guide. Certainly, I'd recommend booktalking it, promoting it, and trying to put it into the hands of children who will appreciate its charms. But I don't think it's innovative, profound, or even funny enough to be a real contender for the Newbery.

Published in May 2012 by Walden Pond Press / HarperCollins
Posted by Sam Eddington at 3:46 PM