2020 Contenders: The Library of Ever, by Zeno Alexander 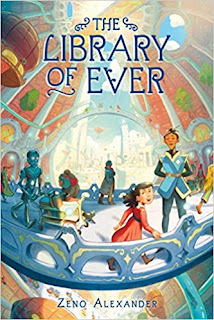 Lenora is extremely rich, but she isn't happy. Her parents are away traveling, and her nanny insists on dragging Lenora on various boring errands, instead of giving her a chance to explore the city. However, the nanny does have to stop at the library, and while they're there, Lenora manages to slip away...and find her way into a much, much, much larger library, one with patrons ranging from a robot from the future, to a spacefaring tardigrade, to a small boy with a missing cat. Lenora convinces Malachi, the seemingly-magical Chief Answerer, to give her a job as Fourth Assistant Apprentice Librarian. This begins a series of adventures that will take Lenora into the future, on a quasi-Fantastic Voyage journey into an ant colony, and into direct conflict with a mysterious group of people with a vendetta against the very concept of the library itself.

The easiest comparison for The Library of Ever is The Phantom Tollbooth, with its bored protagonist who finds his way into another world full of whimsical characters, surreal adventures, and paeans to knowledge and learning. Now, The Phantom Tollbooth is one of the greatest achievements in American children's literature, and it's awfully hard to write anything in a similar vein that doesn't suffer by comparison. The Library of Ever doesn't hit the heights of Tollbooth, and doesn't come particularly close. What it does do, however, is avoid embarrassing itself; if it's not the "instant classic" that the somewhat hyperactive back cover blurb on the ARC declares it to be, it's a fun, breezy read, one amply seasoned with interesting trivia and colorful details.

I think that, if I were still a child, I would have really, really enjoyed The Library of Ever and its bookworm-turned-adventure heroine. As an adult, it roused my normal suspicions about books that lean heavily on tropes about the importance of Story and Knowledge and Libraries. (Once again, let's all return to Rachael's Maxim: "Story and imagination celebrate themselves when deployed effectively.") This particular novel manages to thread that needle better than most -- I don't have the same kind of grumpiness about The Library of Ever that I did about, say, Okay For Now -- doing so mostly by steering into its conceit and not trying to pretend that it's anything other than wish fulfillment for the kind of kids who show up at the library multiple times a week.

I'm actually just guessing about the Newbery eligibility of The Library of Ever -- Zeno Alexander seems to be a Lemony Snicket-style pen name, and I haven't found any information that might indicate who the person behind the nom de plume is. I'm not sure it matters, since the novel doesn't match up all that well in a literary sense against this year's strongest books. I do think it will find its readers, and that those readers will enjoy Lenora's adventures, as well as those to come; a sequel is promised for 2020.


Published in April by Imprint/Macmillan
Posted by Sam Eddington at 11:04 AM