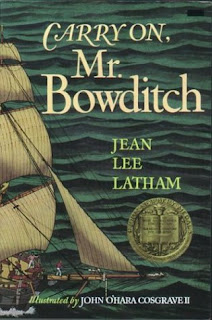 Three Honor books were named in 1956, the best known of which is probably The Secret River, by Marjorie Kinnan Rawlings. The most famous eligible book that was shut out of that year's awards is almost certainly Harold and the Purple Crayon, by Crockett Johnson. Harold is a classic, but I don't think it works at all without the illustrations, and I wouldn't have supported it for the Newbery over Carry On, Mr. Bowditch.
Posted by Sam Eddington at 10:26 AM