2014 Contenders: You Never Heard of Willie Mays?!, by Jonah Winter 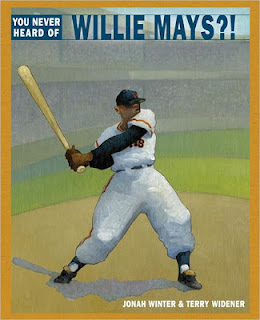 Aside from taking in a game on a beautiful afternoon, there's nothing that diehard baseball fans (a group of which I count myself a proud member) love more than making lists -- and there's no list more fun to make than that of the greatest players of all time. However, there's only a handful of names one can make a reasonable case for putting at the top of that list: Babe Ruth, Ty Cobb, Honus Wagner for sure, and maybe Ted Williams, Oscar Charleston, Mickey Mantle, and (depending on how you feel about steroid use and sports) Barry Bonds. Oh, and Willie Mays -- the Say Hey Kid, the pride of the Giants, one of the most spectacular hitters and fielders ever to roam the diamond, and maybe the greatest.

You Never Heard of Willie Mays?! is written in the second person, as a conversational introduction to the legendary center fielder. Jonah Winter emphasizes Mays' importance in his historical moment, when the major leagues were still in the process of integration (Mays actually played a few seasons in the Negro Leagues as a teenager). He skillfully portrays Mays not only as a preternaturally gifted athlete, but as a tireless worker and ambassador for the game.

Winter makes the interesting choice of ending his story after the 1954 World Series, in which the 23-year-old Mays' spectacular play led the Giants to victory.  This leaves out the remaining 18 years of Mays' career -- which included two more World Series appearances, a second MVP award, and four home run titles -- as well as his eventual induction into the Hall of Fame.  I recognize that the narrative Winter has chosen to tell comes to a natural conclusion there, but I'm not sure I agree with the decision to confine the rest of Mays' brilliant career to the appendix.

I doubt that this particular volume will graze the Newbery list -- the writing is very good, but that hasn't helped other relatively short, heavily illustrated books in recent years (see Each Kindness, Twelve Kinds of Ice, Balloons over Broadway). Winter's previous book in a similar vein, You Never Heard of Sandy Koufax?!, made the Notables list in 2010, however, and that seems like a more realistic projection for You Never Heard of Willie Mays?!