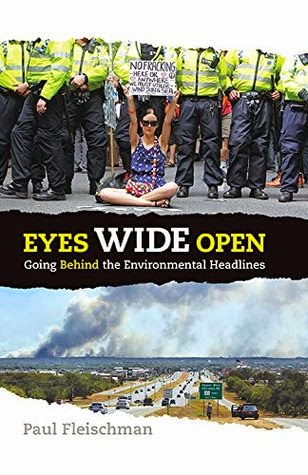 Environmental issues, challenges, and disasters seem to occupy an ever-increasing percentage of the news. Clearly, we have problems, and Paul Fleischman wants to make sure that we are able to understand, analyze, and maybe even solve them.

Eyes Wide Open is a sharp, well-researched, and at times fiery book with two clear objectives: helping its readers to know what current environmental issues are, and making sure those readers have the critical thinking skills to separate fact from opinion. Fleischman talks about global warming, fracking, and renewable energy, but he also spends time discussing rhetorical strategies, cognitive defense mechanisms, and how studies and reports can be affected by who funds them. New information about the environment is always becoming available, and Fleischman wants his readers to able to evaluate it intelligently.

This means that Fleischman doesn't have a lot of patience with those whom he sees as obfuscating the truth, and he isn't shy about saying so. He explicitly mentions Republican denial of climate change, and even uses the famous quote from Stephen Colbert: "Reality has a well-known liberal bias." His tone -- cheerful, but insistent and unafraid -- reminded me of pop-science heroes like Bill Nye and Neil DeGrasse Tyson. Fans of those thinkers will probably love Eyes Wide Open, even if it's hard for me to imagine that this book won't be challenged in at least one library somewhere.

Fleischman is equally clear that he doesn't intend for his book to be read on its own. It includes a dizzying number of links to other sources of information, and a formidable bibliography. Towards the end of the book, he even discusses some of the assumptions that he held when he began writing the book, and how, while his sources and research confirmed some, they disproved others. "Stay open to the facts, wherever they are," Fleischman says, and in some ways, that's the thesis of his book.

Paul Fleischman has, of course, won the Newbery already (Joyful Noise, 1989 award). It's unlikely to me that Eyes Wide Open will net him a second medal; not only does nonfiction rarely win the Newbery, but Eyes Wide Open is more informational than narrative, which indicates to me that it's not a top contender for a "literary" award. I'm curious to see if it draws any attention from the Sibert committee though.


Published in September by Candlewick