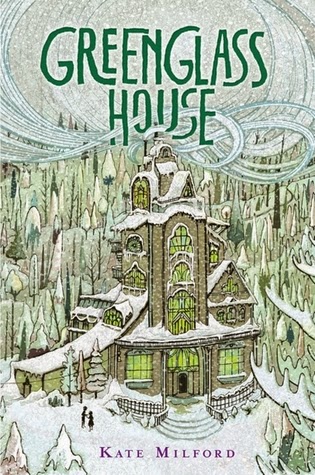 Despite the fact that his parents run an inn, Milo was expecting a nice, peaceful vacation.  After all, the week of Christmas is usually not a busy time at Greenglass House.  But then, on the first morning of the holiday break, the guests just start coming . . . and coming . . . and coming.  Pretty soon, the inn is feeling much too full for Milo’s comfort.  His parents even ask their part-time cook to come up and help.  When her daughter Meddy, a girl just about Milo’s age, attempts to get him to talk to her, Milo is feeling disgruntled and tries to brush her off.  But Meddy won’t be brushed off – she’s sure that these people are all at the inn for a reason, and she and Milo come up with a way to investigate while appearing to be playing an innocuous role-playing game.  They soon discover that the guests are hiding more than one secret between them.  Some of the guests seem to know each other, though Milo wouldn’t call them friends.  Seemingly unimportant articles go missing from some of the guests’ rooms, and Milo hears the occasional sneaky set of footsteps on the creaky staircase, signaling that someone is where they are not supposed to be.  All the secrets and mysteries center on Greenglass House itself – and Milo’s home, where he has lived all his life – eaten, slept, done homework, goofed off – is suddenly much more fascinating and mysterious.  Is a smuggler’s treasure hidden somewhere in the house?  Can Milo and Meddy find it first?

This book rises to excellence in several different ways.  The setting is the first thing that grabs you: a hilltop inn, accessible by inclined railway from the waterfront of the Skidwrack River, frequented by smugglers of various unlikely items (flower bulbs and fountain pens, for instance).  Milo’s world is approximately contemporary to ours and shares some things (Christmas, the War of 1812) while others are charmingly different.  These differences appear as grace notes throughout the story, never piled on too heavily in one place.  Populating that setting are the characters.  The guests at the inn start out as quirky caricatures, but blossom and develop as the story rolls on.  And of course Milo, as main character, has plenty going on.  For one thing, he’s adopted and of Chinese descent, so there’s an undercurrent of him wondering about his birth family and heritage, while still loving his adoptive parents.  This adds depth to the story without ever overpowering the main plot.  Milo is also the sort of kid who values routine and gets agitated when things do not go according to plan, and much of his character development involves him being stretched in new directions by unforeseen circumstances.

In terms of plot, this book delivers a good mix of coziness and adventure – there is exploration of the various nooks and crannies, hot chocolate and scheming by the Christmas tree, and covert investigation with the risk of discovery at any moment.  One thing I really appreciated about this book is how Milo and Meddy’s adventures feel like adventures while still being authentic kid experiences, things that are not out of character or impossible for a couple of kids in a large house full of strange adults.  As an added bonus, there are stories within the story as Milo, prompted by an old book lent to him by one of the guests, encourages all of the visitors to share stories in the evening.  Milo hopes that the stories they share will reveal their secretive reasons for staying at Greenglass House, and many times they do, enriching the book and helping bring all of the plot elements together in the end.

I found a lot to like in this book, and not much to criticize, probably because I’m the sort of reader who likes cozy mysteries in old houses with quirky characters and elements that feel a little bit like fantasy at times.  Another reader might find that the pacing lags at the points where the guests are telling their stories, but this didn’t bother me at all.  I could mention that Milo’s parents are arguably not as well-developed as some of the other secondary characters, but not everyone has to be quirky, and their main role is to provide stability for Milo (while also being preoccupied enough with the running of the inn to let him do his own thing without too much interference).  Is this book a Newbery contender?  Possibly.  This is a particularly strong year for middle-grade fiction, and mystery is a genre that rarely gets a lot of acclaim.  However, I think it’s earned a spot at the front of the pack, at least.

Publication in August by Clarion Books.