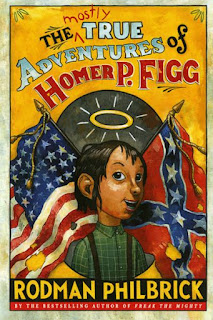 The Mostly True Adventures of Homer P. Figg is a hard book to describe. For the first two-thirds of the novel, it's very much in the vein of something like Adventures of Huckleberry Finn. We follow the titular protagonist as he searches for his brother, Harold, who has been forced into the Union army during the Civil War, marveling at the foibles and schemes of the adults Homer encounters, and laughing at his over-the-top lies. But then it takes a hard left turn into The Red Badge of Courage territory (even nicking that book's climactic plot point), becoming something of a meditation on the horrors of war.

The first part of Mostly True Adventures is fun and clever, but also fits into an established strain of children's literature. However, precious few children's novels are willing to go anywhere near as deep into the battlefields of the American Civil War. (Only Rifles for Watie, Harold Keith's 1958 Newbery winner, springs immediately to mind, and that one is, shall we say, a much less engaging read.) To me, the most effective and moving part of the book takes place near the end, as Homer rides desperately across the Gettysburg battlefield. It breaks into a poetic, all-caps series of brief descriptions of the horrors that Homer sees, ending with the gut punch of "THINGS TOO TERRIBLE TO WRITE, FOR FEAR THE PAGE WILL BURN. / THINGS BEST FORGOT."

Indeed, my 13-year-old daughter enjoyed the book, but opined that the contents of those last few chapters should have made Mostly True Adventures a YA book. I wouldn't go that far -- I think Homer's first-person narration keeps the book from fully tipping into YA territory -- but I certainly understand where she's coming from.

The final page is a brilliant, moving conclusion, and the novel on the whole is a true piece of art. It had no chance to win the 2010 Newbery -- nothing was going to beat When You Reach Me that year -- but the Honor it did take home is well-deserved.
Posted by Sam Eddington at 1:55 PM