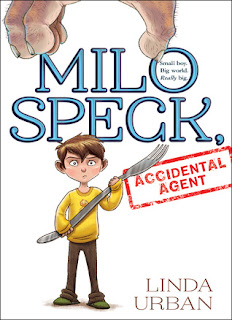 Once an author has written a few books, we often tell ourselves that we know what to expect from them. A Kevin Henkes book will be an existential crisis for elementary schoolers, in the form of a lovingly detailed miniature. A new Jack Gantos title will feature a hapless protagonist in an environment inexorably spiraling out of control, laced with dark humor. Anything by Kate DiCamillo will be funny, but the kind of funny that wears its heart proudly on its sleeve, and it will likely feature at least one animal character.

I thought I had Linda Urban pegged too, as a writer of subdued, carefully-crafted contemporary realism -- someone who would fit well in a group with Cynthia Lord, Gin Phillips, and The Thing About Luck-era Cynthia Kadohata. I never did get around to reading Hound Dog True, but that seemed like a valid assessment of both A Crooked Kind of Perfect and The Center of Everything.

However, Milo Speck, Accidental Agent blows that theory completely away. It's a rollicking, funny, fantasy adventure that's bold and clever, and on the surface at least, has nothing to do with anything Urban has ever written before. In the Author's Note, Urban names Roald Dahl and Edward Eager as her primary influences, and that should give you an accurate idea of how the book reads.

The plot isn't easy to summarize, but involves the adventures of Milo Speck, who falls through a clothes dryer and into the land of Ogregon. Hijinks involving ogres, giant turkeys, secret agents, and more follow. It's the sort of inspired lunacy that often attracts young readers -- it would shock me if this doesn't end up being Urban's book with the most popular appeal.

Surprisingly -- at least to me -- Urban transitions to this mode with apparent effortlessness. Milo Speck is a charming novel that made me smile on numerous occasions. The ending sets up the possibility of a series, so this may not be the last we hear of our accidental protagonist.

I do think, just based on the way the awards committees tend to lean, that Milo Speck is much less likely to receive any accolades than Urban's previous books, even if it may well prove to be a lasting favorite with readers. It does, however, prove that sometimes, reaching beyond your comfort zone leads to unexpected success.


Published in September by Houghton Mifflin Harcourt
Posted by Sam Eddington at 11:54 AM