2014 Contenders: My Adventures as a Young Filmmaker, by Andrew Jenks 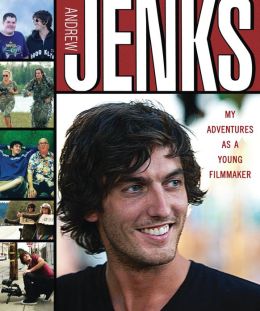 Andrew Jenks is a reality star and documentary filmmaker, but the word that he repeatedly uses in My Adventures as a Young Filmmaker is "story." Jenks sees himself as a storyteller -- film is his medium of choice, but one gets the sense that he's more interested in the message than the medium. Perhaps that's one reason why his autobiographical book comes off better than those of many celebrities: even if print isn't Jenks's usual format, he's still telling a story.

Indeed, Jenks's distinctive voice is really what drives Adventures. He's brash, snarky, and sometimes even arrogant, but he's also painfully candid about his struggles, shortcomings, and occasional poor choices. His skill as a filmmaker and storyteller comes from his ability to empathize deeply with those around him, which comes across in his descriptions of the people at the nursing home where he shoots his first documentary, the small group of faithful friends who accompany him on his adventures, and his circle of supportive family members.

Adventures has a breezy charm, even though not all portions of the book are equally engaging. That might just be an inherent risk of the subject matter -- to me, at least, it's more interesting to read about Jenks as a failing film school student in pursuit of his left-field idea of making a movie about himself moving into a nursing home than it is to see him making docs about star musicians and going to the VIP section at clubs. Sometimes, it's the pursuit of success that holds interest, rather than the success itself.

I don't really know what the awards committees will make of My Adventures as a Young Filmmaker. It hits the upper end of the Newbery age range, but it's much more "popular" than "literary," as nonfiction goes, and I don't think it's going to receive real consideration there. The Sibert is notoriously resistant to pop culture biographies -- unless you think When Marian Sang or The Voice That Challenged a Nation counts, none have been honored in the 13-year history of the award. The YALSA Award for Excellence in Nonfiction for Young Adults did name Janis Joplin: Rise Up Singing as its 2011 winner, so maybe Jenks' book has a better shot there. Realistically, however, I think it's more likely that Adventures has the same fate as something like last year's Face Book, which didn't win, place, or show in any of the major awards, but did get named to the Notables list, and won a wide readership.

I can't make a good argument for putting Adventures over this year's top Newbery contenders so far, but I do hope it's recognized in some way -- or at least, that it finds its way into the hands of the readers who will enjoy it.


Published in March by Scholastic