2013 Contenders: Shadow on the Mountain, by Margi Preus 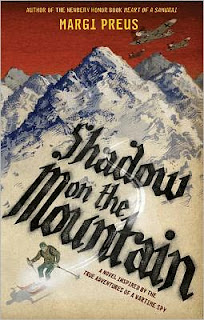 It was fascinating to read Shadow on the Mountain so soon after Bomb. A key point in Bomb is the destruction of the Vemork heavy water plant in Norway in a mission by British-trained Norwegian resistance fighters. Shadow on the Mountain takes us further into the world of the WWII Norwegian underground, a world of espionage, subterfuge, and secrecy, where old friends may end up on opposite sides, and the slightest misstep may mean death.

As the novel opens, fourteen-year-old Espen is just entering the resistance movement, distributing illegal newspapers that dare to carry anti-Nazi stories. The story proceeds to follow him as he becomes more and more involved -- and his missions become more and more dangerous. Several of his old soccer teammates, his sister Ingrid, and his girlfriend Solveig also join the resistance; however, always lurking in the shadows are Espen's former best friend Kjell, who has been blinded by Nazi propaganda, and Aksel, another old soccer teammate, who now works for the secret police.

Most of the elements in Shadow on the Mountain are based on true events. Epsen himself is largely modeled after Erling Storrusten, whose career in the resistance is described in the excellent back matter. This lends the book an authenticity that I think many readers will find exciting. Each scene is written with precision and suspense, and I know that I found myself drawn into the struggles of Espen and his friends as I was reading.

The other side of that, however, is that the book is episodic perhaps to a fault. When the Nazis take over Espen's soccer team just before the championship game, for instance, he and his friends quit; however, they declare that they're going to play the game in secret against the other team, whose members have also quit. But there's no scene of the secret championship, and in fact, it's never mentioned again.

Spoiler alert: I also need to talk about the ending of the book. After Espen's cover is blown, he flees to Sweden, which is not under Nazi control. After a harrowing struggle, he makes it...and that's the end. Although it's stated that the war is turning against the Nazis, we don't get to see it end; nor do we get to see whether Espen and Solveig are able to get back together, or what happens to Ingrid. The back matter does discuss what happened to Erling Storrusten, and so one can make inferences, but it's still quite an abrupt ending.

Even though Espen is fourteen when the book starts and nineteen when it ends, Shadow on the Mountain reads more as an upper middle school book than a YA title; the copy I read had indeed been catalogued in Juvenile Fiction. What it does well, that sense of immediacy and historical fidelity, it does well indeed, and I think it will find many well-deserved readers. However, it does have flaws, and I don't think in this publishing year that it's quite good enough to take home the Newbery.


Published in September by Amulet Books/Abrams
Posted by Sam Eddington at 10:00 AM